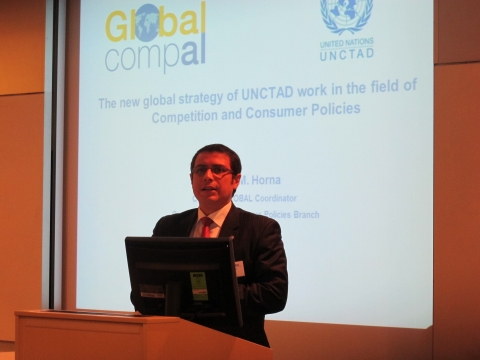 On 28 April 2015 UNSW and CLMR hosted a presentation by UNCTAD, looking at its present and future activities before the Heads and representatives of competition agencies ahead of the 15th Annual Conference of the International Competition Network (ICN).

The event presented the main themes of the forthcoming Seventh United Nations Conference to Review All Aspects of the Set of Multilaterally Agreed Equitable Principles and Rules for the Control of Restrictive Business Practices (UN Set); outlined UNCTAD’s new technical assistance and capacity building strategy “GLOBAL COMPAL” and presented work on the issue of Competition Neutrality.

The first session, presented by Pierre Horna, GLOBAL COMPAL Coordinator, Competition and Consumer Policies Branch, UNCTAD looked at the themes of the Seventh United Nations Conference to Review the Set1, which will take place between 6th and 10th July 2015. The Conference will include five roundtables (on issues ranging from inclusive and sustainable growth to the benefits to consumers of competition in the pharmaceuticals sector) the Voluntary Peer Reviews of Albania and of PNG and Fiji, discussions on the revision of the United Nations Guidelines on Consumer Protection and a panel discussion on the evaluation of UNCTAD’s Voluntary Peer Review mechanism.

The second session again presented by Pierre Horna, with comments from Fernando Furlan, Member of the Advisory Group of Experts of GLOBAL COMPAL, and Carl Buik, Former UNCTAD official and Consultant of the COMPAL-ASEAN Regional Project on Consumer Protection, looked at UNCTAD’s GLOBAL COMPAL2, its recently adopted general strategy for intervention in Competition and Consumer Protection worldwide, and the development of its component programmes. As a result of the success of COMPAL (Competencia y Protección del Consumidor en America Latina – Competition and Consumer Protection for Latin America), which has been running for more than 10 years thanks to the financial support of the Swiss Government, the Programme’s strategy has been “exported” to different regions, such as the MENA region through the COMPAL MENA Programme and also through the ASEAN region with the launch of COMPAL ASEAN on consumer protection issues.

Deborah Healey, Associate Professor at UNSW conducted the third session focussing on the topic of Competitive Neutrality. She discussed the analysis and implementation of competitive neutrality policy, drawing upon the results of the Competitive Neutrality project completed under the auspices of the UNCTAD RPP.3 The issue of the adoption of competitive neutrality frameworks is one of the five central objectives of the COMPAL MENA programme.