The Role of Government in the Market: Competitive Neutrality Policy 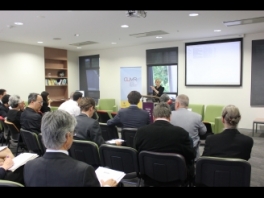 On 28 and 29 October the Centre for Law Markets and Regulation hosted an Expert Symposium on Competitive Neutrality (CN) attended by Australian regulators, academics and international guests.

Associate Professor Deborah Healey welcomed the participants to the Symposium to explore this important area of competition policy in light of practice and the recommendations of the Harper Review of Competition Policy and Law in March 2015. The Symposium followed on from international research on the subject for the United Nations Committee on Trade and Development.

Professor Gary Sturgess from the Australia and New Zealand School of Government, who has written and researched broadly in this area, spoke about the original implementation and evolution of CN policy in Australia and the Harper proposals, including those for marketization of human services. Ben Dolman, the Principal Adviser of Small Business, Competition and Consumer Policy Division, and Matthew Tsikrikas, Policy Analyst, from the Australian Treasury, spoke about the implications for governments of the Harper Review. Representatives from the Australian Government Competitive Neutrality Complaints Office of the Productivity Commission, the ACCC, the Office for the Commissioner for Better Regulation (Victoria) and the Queensland Competition Authority contributed against the background of their implementation experience of current law and practice and suggested improvements which could be made in future. Rhonda Smith, from the University of Melbourne, highlighted practical problems with the existing system. Dr Rob Nicholls from UNSW Business School spoke of competitive neutrality and net neutrality issues facing the ABC.

We were delighted to have Professor Shiying Xu from East China University of Politics and Law (ECUPL), Professor Xiaoye Wang of Hunan University, and a Fellow of the Chinese Academy of Social Sciences, and Dr Pinguang Ying from SUIBE who offered in depth analysis on Chinese aspects of this issue, including detailed analysis of State Owned Enterprise reform. May Cheong from UNSW Law addressed the issue from the perspective of Malaysia.

Participants agreed to continue the dialogue with a view to a publication on the topic.